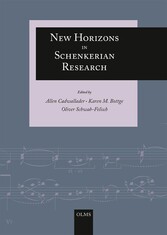 New Horizons in Schenkerian Research is a collection of essays representing an overview of scholarship in the work of Heinrich Schenker. The volume is diverse and includes the work of authors in the United States, Austria, and Germany. Current research involves four broad categories: Theory and Influence, Analysis, History and Reception, and Cultural Studies. This volume presents articles by senior scholars who have been involved in Schenker's work for decades. A unique feature of New Horizons is the inclusion of German-speaking authors. Although Schenker lived and worked in fin de siècle Vienna, the early dissemination of his ideas occurred in the United States in the 1930s and 1940s. More recently, scholars in Germany and Austria have contributed their own research to the canon of Schenker studies. This eclectic collection bears testimony to the enduring relevance of Schenker's ideas in music scholarship of the twentieth and twenty-first centuries.